Now we’re shifting into a new ‘future’, recognized by the micro-chip. We have a new type of factor that is occurring in this new method. But no one has responded to the query of whether this method is capable of assisting us in executing long-term intellectual work. I value most these long-form open-ended concerns that allow us to query concepts and each other person’s terms over a prolonged time interval. The issue is that the method is mainly developed on a way of diversion. It’s made with plenty of factors occurring all at once; it’s a very low bar for people to reply to any twitch of fascination that happens at one. Moreover to this display, there is any number of other windows. There’s e-mail. This is what this method does well. 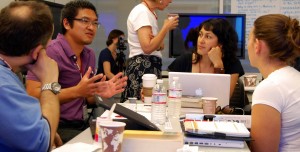 The factors I value most in the humanities might not endure in this new method. All of this is depending on the assumption is that what exactly is occurring in the regular face-to-face class has been changed, in the ‘flipped classroom’. This is a euphemism, but what we’re really doing is getting the live session and tossing it into the dustbin. But I do not believe the fact that the live session is damaged and needs to be thrown out. The live session is like the play, as opposed to TV system. But we need to look at our lessons more seriously. Are they any good?

The custom as it’s passed down says that 50 minutes is the most ideal interval of your efforts and energy and time to do what we’re doing in the humanities. But now we’re asking it, which is good, but only because we have a new orthodoxy, which says that the concept time is 12 minutes or 8 minutes. But that is what matches the method, not actually what results in a more vivid chance to learn.

Major professionals in international policy, national security, worldwide diplomacy and foreign language study came together at Stanford lately to talk about an unlikely common profession thread: the humanities and public sciences. Those present involved former U.S. secretary of state and present Stanford lecturer Condoleezza Rice; former secretary of defense and Stanford lecturer emeritus William Perry; project naturalist Steven Denning, the seat of the Stanford Panel of Trustees; Karl Eikenberry, a fellow at Stanford’s Center for International Security and Cooperation, former ambassador to Afghanistan and a retired general. They were among the 26 participants who mentioned how the humanities and public sciences enhance this country’s diplomatic, security and worldwide plan efforts.

They were gathered together by a nationwide commission that has been billed by the legislature with discovering ways for the United States to sustain nationwide quality in the humanities and public sciences. Eikenberry succinctly took the value of the discussion when he said that knowledge of history, language and societies can help America more efficiently get around the increasing number of “multinational issues that need worldwide solutions.”

Stanford Lecturer of German studies and relative literary works Russell Berman shared Eikenberry’s emotions about the value of vocabulary skills and advised the commission to look at This country’s K-12 language requirements, which are much less strict than those of the European Union countries. In implying the value of the human element on the front lines, Joel Vowell, a lieutenant colonel in the U.S. Military who has served in Iraq and Afghanistan, said that by putting a well on the Afghan borders, his military unintentionally chose sides in a 400-year-old argument between two towns. Vowell added that when the military is planning for complicated combat circumstances, most of their questions are about lifestyle and history.